These changes | BBG-proposed cuts for VOA | will stifle the struggles of the young people in China who seek religious freedom and democracy. 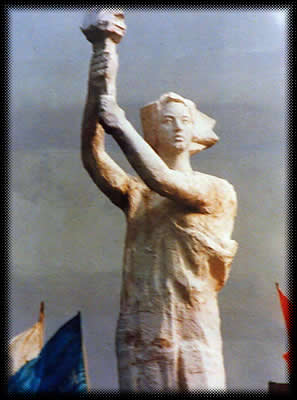 Statue of the Goddess of Democracy on the Tiananmen Square, 1989

Ann Noonan, President of the New York Chapter of the Visual Artists Guild spoke Saturday on behalf of Free Church for China at the New York City June 4th Tiananmen Square Commemoration, which was held at the UN’s Dag Hammarskjold Park. Here is the text of Ann Noonan’s remarks, in which she described in detail the BBG plan to end Voice of America radio and TV broadcasts to China. The VOA China Branch television news program has had more members of Congress as guests than any other Voice of America broadcast.

Young people throughout the world, like the young people who risked their lives 22 years ago in Tiananmen Square, are risking their lives today for basic human rights, freedom, and the right to participate in governing themselves. They look to the United States for inspiration. Their stories deserved to be shared.
VOA is part of a Congressional mandate which provides news broadcasts that promote freedom and democracy from the United States to the world. The VOA Charter states: “The long-range interests of the United States are served by communicating directly with the peoples of the world by radio… 1. VOA will serve as a consistently reliable and authoritative source of news…”
In its budget request, the Broadcasting Board of Governors, which oversees VOA has proposed to end its radio and television broadcast to China. This is not part of any potential budget cut problems facing Americans, but rather, it’s Voice of America being forced to re-allocate an actually higher budget than last years away from Chinese language services.
Today as we commemorate the 22nd Anniversary of the Tiananmen Square Massacre, a day in history when the world watched students in China who sought freedom be cut down, killed, jailed and exiled, I’d like to ask each of you to contact Members of Congress about plans that will censor Voice of America’s Chinese services as of October 1st.
This campaign against VOA is insidious. It comes during China’s media crackdown on stories against Ai Weiwei and Nobel Peace Prize Laureate Liu Xiaobo. It comes during a time when China’s media has blocked news about uprisings in Egypt and Libya. It comes during a media crackdown in China against any stories shared about the blind lawyer Chen Guangcheng, and other prisoners of conscience.
Why should we think that a nation as large and vast as China that already has to deal with an oppressive internet censorship should have the range of radio broadcast reduced or shrunk in depth or coverage? These changes will stifle the struggles of the young people in China who seek religious freedom and democracy.
And why should we as Americans be the cause of these changes? Our Members of Congress need to reject the Broadcasting Board of Governors’ proposal to eliminate Voice of America’s Chinese services. We must maintain Voice of America’s broadcasts and continue to transmit our ideals of freedom and democracy to all. I’d like to ask each of you to keep the message of Pope John Paul II in your hearts as we continue to press for justice: “Be not afraid.”

Actor Richard Gere and others call for ...