An op-ed in The Washington Examiner analyzes an early Voice of America (VOA) central English newsroom VOA News report on protests in Cuba and concludes that it favored the communist regime. The op-ed’s author is a journalist, writer, and media freedom advocate Ted Lipien. He was Voice of America’s Polish service chief during Poland’s struggle for democracy and VOA’s acting associate director. He also served briefly in 2020-2021 as RFE/RL’s president. Disclosure: Ted Lipien is one of the co-founders and supporters of USAGM Watch.

The featured image is a graphic produced in 2016 by the Voice of America at U.S. taxpayers’ expense to illustrate VOA reports in various languages about Fidel Castro’s death. VOA put more effort into honoring Castro in this graphic than it paid attention to Cuban pro-human rights demonstrators in its initial report on protests in Cuba.

The VOA report called the latest protests “rare” making it appear that Cubans rarely protest against the regime. That is not true. Each time a Cuban risks his or her life to escape Cuba, he or she is making a protest. It was the scale of the latest protests that was unusual in recent years, but VOA failed to explain that until now Cubans generally avoided protesting in the streets in large numbers because of the fear of the brutality of the communist regime. Cubans have been protesting against the regime in many other ways.

VOA is managed by the $800-million U.S. Agency for Global Media (USAGM) and VOA journalists are U.S. government federal employees or government contractors.

Some of highlights for The Washington Examiner Op-Ed:

The VOA News English headline and the lead sentence also strongly suggest that the protests were primarily COVID-19 and economy-related. Only in the second sentence the words “freedom” and “liberty” briefly appear. There are no references in the VOA News report to decades of massive and brutal human rights violations in Cuba, Cuban political prisoners, or Cuban refugees.

There is also not a hint in the VOA report that Cuba has a communist government. Such terms as “communist” and “communism” are not used by VOA in this report. The VOA News also does not mention that Cuba has a state socialist economy. The word “socialism” is not used.

The report focused on the Cuban regime’s criticism of U.S. sanctions imposed by the Trump administration but did not note that they were imposed in response to human rights violations.

In another failure of journalism at the Voice of America, the initial VOA News report had nothing on Republican Sen. Marco Rubio’s criticism of the Biden administration’s response to the protests in Cuba, even though the VOA Charter, which is U.S. law, says that the Voice of America “will represent America, not any single segment of American society, and will therefore present a balanced and comprehensive projection of significant American thought and institutions.”

The last word in the VOA News report went to a Cuban regime official: “Carlos Fernandez de Cossio, the top Cuban official in charge of relations with the United States, accused the U.S. State Department and its officials of ‘promoting social and political instability in Cuba,’ and said they should ‘avoid expressing hypocritical concern for a situation they have been betting on.’”

“‘Cuba is and will continue to be a peaceful country, contrary to the U.S.,’ he tweeted Sunday,” the VOA report left as the final word.

If we had reported on Solidarity protests in Poland in the 1980s the way the VOA central English newsroom has reported over the weekend on the latest protests in Cuba, the Poles might still be waiting for democracy. We would also have been roundly condemned by the Polish American community and by our radio listeners in Poland if we practiced the kind of journalism reflected now in many VOA English News reports. 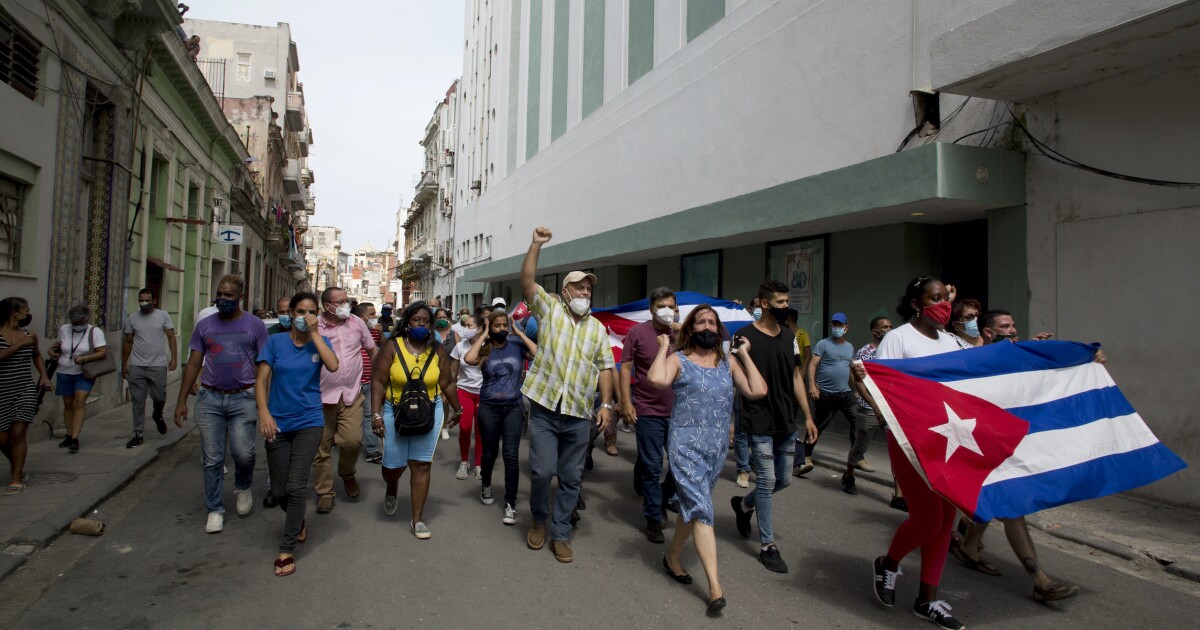 Voice of America report favored Castro regime in Cuba protests
When I was in charge of Voice of America broadcasts to Poland in the 1980s, while the independent Solidarity trade union led by Lech Walesa launched its struggle for freedom and democracy, the news the Polish Service received from the central English VOA newsroom was not always well presented, but…
TagsCongressCubaCuba protestsCuban-AmericansMarco RubioTed LipienUSAGMVOAVOA CharterWashington Examiner
Share:
Previous Article